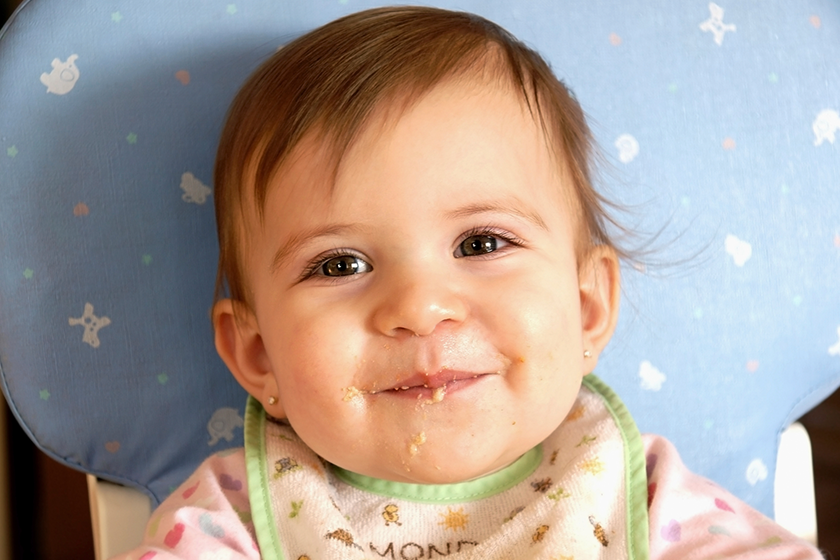 For many years, doctors recommended that parents give their babies iron-fortified cereals first. Rice was believed to have a low risk for allergic reaction, and fortification with iron meant that it would help meet the needs of breastfed babies, whose iron stores begin diminishing at about 6 months of age (the time when parents begin to introduce solid foods). Today, few pediatricians recommend that parents start with rice cereal.

Former chair of the American Academy of Pediatrics’ (AAP) nutrition committee, Dr. Frank Greer, encourages parents to choose different first foods for their babies, noting that the group has “been trying to move people away from the use of rice cereal for the first weaning food … because it does not really provide that much nutrition.”

Currently, the AAP’s position on introducing solids is that there is not sufficient evidence to show that introducing solids in any particular order is beneficial. Instead, the organization suggests babies should be offered a wide variety of nutrient-rich foods, including a variety of grains, within the first year, in part to reduce exposure to arsenic from rice. Other good first-food options include sweet potatoes, squash, carrots, avocado, apples, pears, bananas, and peaches.

Parents should be aware that recent research on the topic from the FDA and other organizations have raised concerns about the levels of inorganic arsenic in rice and rice-based products, including baby cereal. Inorganic arsenic is added to the environment through human activities (inorganic) such as burning coal and the use of arsenic-containing compounds in pesticides. The Environmental Protection Agency (EPA) describes inorganic arsenic as a carcinogenic (cancer-causing) agent; several studies have linked it with skin cancer, as well as cancer of the prostate, liver, bladder, kidney, nasal passages, and lungs. For children, long-term exposure may cause lower IQ scores; exposure in utero and early childhood may increase mortality risk in young adults.

Experts don’t know what level of arsenic is dangerous to public health. The FDA continues to monitor levels in food (view some reports here), including infant cereal, and some manufacturers have adjusted their manufacturing practices to address concern.

Consumer Reports has called on the FDA to set federal maximum levels for arsenic in food, especially baby food, and cautions the public about eating large amounts of rice and feeding it to small children. In 2016, the FDA acknowledged that arsenic in rice poses a particular concern in infants, whose intake of the grain is about three times greater than adults, and peaks at about 8 months of age. The agency issued draft guidance to industry, setting an “action level” of 100 parts per billion (ppb) for inorganic arsenic in infant rice cereal.

Try a variety of foods

Iron-fortified cereal—not only rice, but also oat, barley, or multigrain cereal—can still be one of many foods your baby eats throughout the day but cereal no longer tops the list of recommended first foods. If you choose to avoid cereal altogether, you can easily meet your child’s iron needs through a variety of other foods: meat (poultry, fish, or red meat); beans (lentils, chickpeas); dark green vegetables; and bread. Vitamin C enhances your baby’s ability to absorb iron, so you may want to offer a vitamin C–rich food (e.g., strawberries, guava) alongside an iron-rich food.

Be sure to introduce one new food at a time, wait a few days before adding each new food, and watch for any signs of allergic reaction.