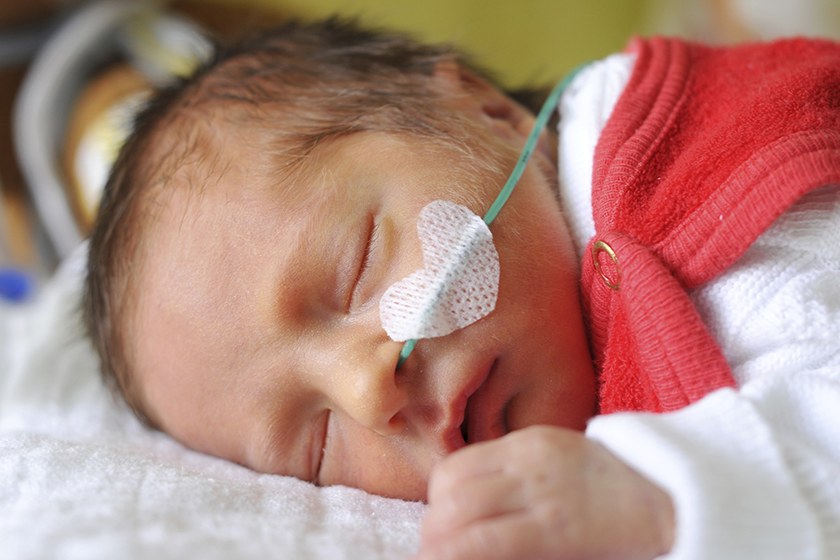 Necrotizing enterocolitis (NEC) is a serious, often life-threatening disease of the gastrointestinal tract and is considered a medical and surgical emergency. It happens when tissue in the small or large intestine is injured or begins to die off, according toProlacta Bioscience, Inc. This causes the intestine to become inflamed or weak, which in turn may cause a hole to develop.

Its manifestations can range from mild (requiring rest and time to heal) to severe (resulting in cell death and intestinal rupture, which can lead to death). Gastrointestinal symptoms associated with NEC include vomiting, diarrhea, and bloody stools.

About 90 percent of NEC cases occur in pre-term infants, according to the American Pediatric Surgical Association (APSA).

While the reason that NEC occurs remains unclear, researchers have identified a number of factors that increase a baby’s risk. Prematurity poses the greatest risk: the younger the infant, the greater the risk. The following factors may increase risk as well:

Some risk factors may relate to a baby’s environment:

The key to preventing NEC is preventing pre-term birth. While all babies can develop NEC, pre-term infants are the most vulnerable. For tips on reducing the risk of preterm labor and birth, read this.

If an infant has been born prematurely, specific strategies for reducing the risk of NEC include the following:

All infants with NEC need to be treated with medicines and therapy, notes KidsHealth.org. Some infants need surgery to repair the intestine. Medical professionals also administer other treatments to babies with NEC, which could include these:

If a baby with NEC responds to treatment, she can be back on regular feedings after a week, notes Prolacta. When feedings start again, breast milk is recommended because it’s easily digested, supports the growth of healthy bacteria in the intestinal tract, and boosts a baby’s immunity.

The baby also will be monitored closely. Most babies who develop NEC recover fully and don’t have further feeding problems, notes KidsHealth. Ask your health provider for advice on how best to care for and bond with your baby during treatment.