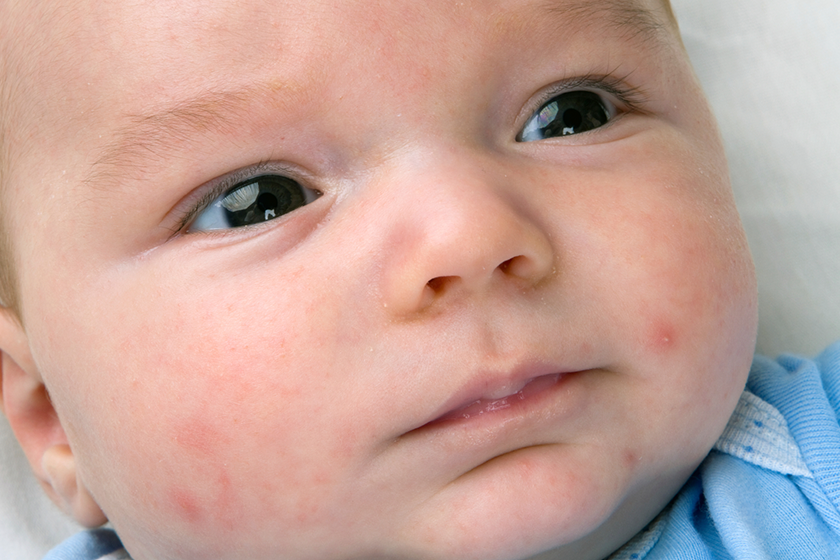 Being a new parent can turn even the calmest, most rational human being into a worrywart. As any pediatrician will attest, stressing about little things often goes hand-in-hand with parenthood. Fortunately, there’s usually no need for alarm.

Here are 10 newborn conditions that are sure to elicit a “What is THAT?!” from new parents, along with some facts to calm your fears.

An umbilical hernia is a bulge that occurs when part of the intestine pokes through a weak spot or small opening in the abdominal muscles. This condition causes a bulge near or in the belly button but is not considered dangerous and often closes on its own without treatment. It occurs in 10 percent of infants and is usually painless.

Why does it happen? The muscles of the abdominal wall aren’t completely formed at birth, which can cause a soft bulge to form. It becomes most noticeable when the intestines protrude through the opening in the abdominal muscles.

When will it go away? An umbilical hernia usually resolves on its own by your baby’s first birthday. If it’s not completely gone by age 5, it might need to be surgically repaired.

The “startle reflex” is a sudden, involuntary extension of the arms and legs that occurs when your baby is surprised or scared. It can startle parents as well, because it appears that your little one is in distress, when she’s simply reacting to loud sounds or sudden movements. In fact, it’s actually abnormal if a newborn doesn’t display the startle reflex. Pediatricians will check for the presence of this reflex at birth and during well visits to ensure that your baby’s nervous system is functioning normally.

Why does it happen? The Moro reflex is one of the many primitive reflexes babies are born with, in addition to rooting, sucking, stepping and grasping. This involuntary response is your baby’s intuitive reaction to stimuli such as a loud noise or sudden motion. In some instances, it may seem like an overreaction, like when she catches herself drifting back to sleep.

When will it go away? This Moro reflex usually disappears by 4 to 6 months of age as your baby becomes more accustomed to the sights and sounds of her new environment, and gains more control over her muscles.

Approximately 80 percent of newborns have these small, white or yellow fluid-filled cysts on the roof of their mouth or gums. The “pearls” are so small, the size of a pinhead, that you might not notice them at all. If you do discover them, you’re likely to have the same reaction many parents have: “Ewww…gross!” And while they are, in fact, kind of gross, they’re also completely harmless.

Why does it happen? During pregnancy, the two halves of your baby’s jaw and palate fuse together. Often the mucus membranes get trapped in the skin pockets, causing tiny bumps known as Epstein pearls.

When will it go away? Epstein pearls usually disappear in 1 to 2 weeks. Parents should only be concerned if they see white spots in other areas of the mouth which can be a sign of thrush.

Jaundice is a common newborn condition affecting 3 out of 4 newborns. You will know your baby has jaundice if his skin and the whites of his eyes turn yellow.

Why does it happen? Jaundice is caused by excess bilirubin in the blood. Bilirubin is a by-product of the normal breakdown of red blood cells. The immaturity of a baby’s liver can slow the processing of bilirubin.

When does it go away? Jaundice generally disappears by 1 to 2 weeks of age. Babies who aren’t receiving enough milk (underfed) are more prone to jaundice. The American Academy of Pediatrics (AAP) recommends that mothers breastfeed at least 8 to 12 times a day during the early weeks to ensure that their babies are getting enough to eat and to prevent jaundice.

If the jaundice persists or the bilirubin level continues to rise, your baby might need to be placed under special lights in the hospital (phototherapy). (Click here for more on the different types of jaundice and here to learn more about breastfeeding and jaundice.)

Cradle cap, also known as infantile seborrheic dermatitis, causes flaky, dry skin that can be moderate (dandruff-like) or severe (thick, oily, yellow or brown patches). It typically appears near the scalp and forehead, but can also show up on other parts of the head, face, and ears.

Why does it happen? While there’s no clear cause, doctors suspect that the hormones a baby receives from his mother can overstimulate the baby’s oil-producing (seborrheic) glands, resulting in cradle cap.

When will it go away? Cradle cap usually disappears after a few weeks, but can persist for months. Wash your baby’s hair daily with a mild shampoo (use a dandruff shampoo such as T-Gel® if the cradle cap is severe), then rinse with warm water and gently brush away the dead skin with a soft toothbrush. Don’t worry if you don’t get it all off. Although it may be unsightly, cradle cap isn’t harmful to your baby.

Children love to cross their eyes but a baby’s eyes can sometimes cross involuntarily, which can be more worrisome than entertaining. During the first few months of life, it is normal for your baby’s eyes to cross.

Why does it happen? Babies can’t focus their eyes at first so it’s normal for their eyes to drift and wander. Sometimes their eyes can appear to be crossed even though they are not, due to a condition called pseudoesotropia. In this instance, the flat bridge of their nose and wide set eyes help create an optical illusion. Even though the pupils are lined up and moving together, the white area of an eye is partially covered by an inner eye skin fold, giving the appearance of being crossed.

When will it go away? By 3 to 4 months of age, the eyes should cease to look crossed. Your pediatrician will be checking your baby’s eyes during well visits. If they suspect a condition such as strabismus (the misalignment of one of both eyes, which affects about 4 percent of children), you can rest assured they’ll send you to a pediatric ophthalmologist.

Oh no! Baby’s first cold?! Unlikely. As adults we don’t really think too much about a sneeze. Get a cold… sneeze. Have allergies… sneeze. But who knew that newborns could sneeze so much?!

Why does it happen? Your baby’s nose is so tiny that almost anything can irritate it—dust, hair, or leftover mucus from the birth canal can trigger a sneeze. Sneezes are completely harmless and aren’t indicative of illness.

When will it go away? You can expect to hear some sneezing for the foreseeable future, mainly because your baby breathes through his nose. Contact your pediatrician if the sneezing is accompanied by a lot of mucus, a cough, or fever.

Changing your baby’s diaper and discovering spots of blood can put Mom and Dad on high alert. Believe it or not, baby girls can have a “mini period” during the first few days of life.

Why does it happen? During pregnancy, maternal hormones can cause the lining of your unborn baby’s uterus to shed a little blood.

When will it go away? The “spotting” usually stops within 24–48 hours. If the bleeding is heavy, persistent, or your newborn has other signs of illness (fever, rash, etc.) call your baby’s doctor right away.

To learn more about what you’ll find in your newborn’s diaper, check out our “Scoop on poop” article here.

Your baby’s genitals (boys and girls) can appear enlarged or swollen after birth. Depending on the amount of swelling, the genitals can also appear red and painful. Luckily, they’re neither.

When will it go away? Once the hormones are eliminated from your baby’s body, the swelling generally disappears. This may take several days or several weeks depending on the level of hormones and whether the baby is breastfed or formula-fed, since breast milk also contains small amounts of hormones.

You’re expecting smooth, soft newborn skin, but instead your baby’s face looks like that of a teenager covered with tiny red bumps. Baby acne which is different from milia (the tiny white bumps that appear on about 50 percent of all newborn faces) can appear anywhere on the face, but is commonly found on the cheeks, nose, and forehead. While some babies are born with acne, the condition usually pops out around 3 or 4 weeks of age.

Why does it happen? Once again, maternal hormone levels right before giving birth are thought to be the culprit but there is no clear cause.

When will it go away? It is not uncommon for babies to have acne breakouts for the first 4 to 6 months of life—and there’s not much you can do about it. Trying to treat the area can irritate it even more, so the best course of treatment is to just leave it alone. You can gently cleanse your baby’s face everyday by patting it with a damp, warm washcloth. If you baby’s acne persists beyond a few months, talk with their pediatrician about treatment options.